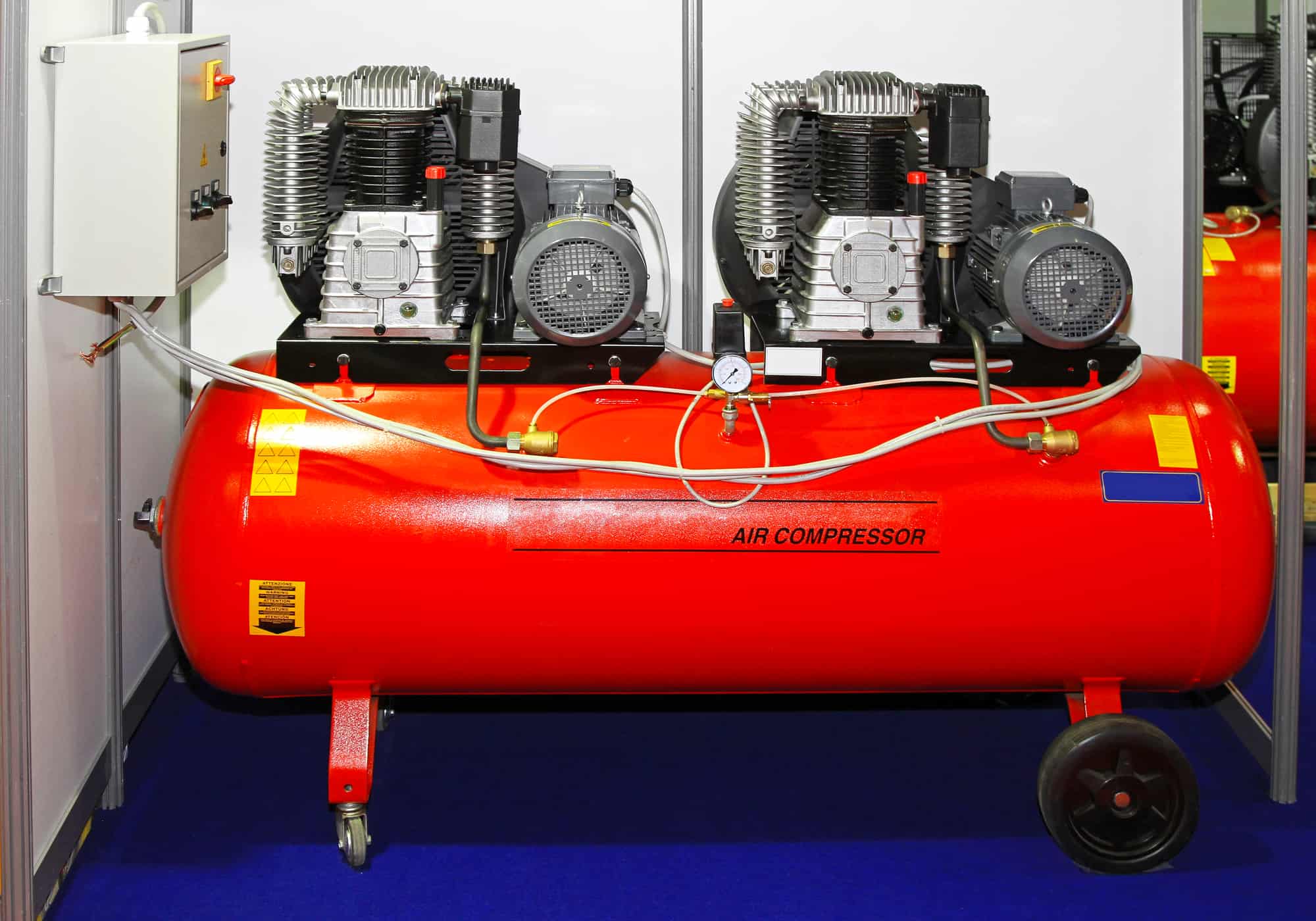 This article gives you a comprehensive comparison of air tanks and air compressor uses, sizes, and costs. Knowing the differences between them will help you decide which you should choose for your compressed air needs.

The function of air tanks and air compressors is the same when it comes to the transfer of energy through compressed air.

However, air tanks and air compressors differ in how they operate when transferring compressed air energy.

Air tanks are portable compressed air storage vessels that you can easily carry around for simple applications.

They are common in workshops and garages, and vehicle owners use them for their tire-inflating needs.

The uses of compressed air tanks include:

Unlike air compressors, ordinary small-sized air tanks can only run a few simple operations before you have to refill them.

An air compressor compresses air and converts air pressure into usable energy. That way, it supplies airflow to equipment or an application.

They are commonly used in larger machines like refrigerators and industrial applications because they can compress large amounts of air and supply it to an application.

Some air compressors have an attached air tank. A good example is the California Air Tools 8010A Air Compressor which you can purchase from Amazon.com. The tool has a:

To use an air compressor, open the air inlet to allow air to pass into the cylinder. Once in the cylinder, the air is pressurized and forced through the outlet valve into an air tank, through an air tool, or an application.

Specific uses of air compressors include:

Integrated Use of Air Tanks in Air Compressor Systems

Combining an air tank with an air compressor helps in:

Overall, you could think of combining air tanks and air compressors as a mode of optimizing efficiency in an industrial plant.

Size differences between air tanks and air compressors are marked by their tank volume capacity (in gallons), the amount of compressed air they can store/produce, and the pressure capacity (in PSI).

A ten-gallon (37.8 L) air tank is likely to be more useful for a few applications, while a small five or seven-gallon (18.9 or 26.5 L) tank is only suitable for small applications, even though it’s lightweight and easy to carry.

Air tanks used in large operations and those integrated into industrial air compressor systems can be thousands of gallons. In other words, the size of an air tank will depend on the type and the application.

For example, if you need an air tank to inflate the flat tire of a small car, you should go for one with a capacity greater than 7.5 gallons (28.4 L) for two reasons:

In addition to their volume capacity, the size of air tanks is also measured by their pressure rating.

Air tanks have a maximum pressure rating, which is the maximum air pressure that the air tank can handle without posing any risks.

Instead, consider these three measurements for a more accurate sizing:

An air compressor’s PSI is its pressure capacity or the amount of force with which it can deliver compressed air.

An air compressor’s CFM is its airflow rate or the amount of compressed air it can produce at a specific pressure level.

When considering an air compressor, its HP rating is not as crucial as its CFM and PSI ratings because more horsepower does not necessarily mean better air compressing.

Comparing the cost of air tanks and air compressors can be tricky. This is because both are primarily created and used in different applications.

Different air tanks have specific uses. Some are for:

For example, the price of a 6-gallon air compressor can be somewhere between $100 and $200. However, you can easily find a 10-gallon tire inflator air tank for about half that price.

Air Tank or Air Compressor: Which Should You Get?

To break it down for you, if you need compressed air for inflatables, a simple air tank will do the job for you.

However, air tools like wrenches, nail guns, sanders, grinders, and drills and high-energy operations like cutting, positioning, and packaging in large industries will require you to have an air compressor.

If you have a high-energy tool, consider combining an air compressor with an air tank to improve efficiency.

But the cost should not surpass purpose and function when deciding whether you should go for an air tank or an air compressor.