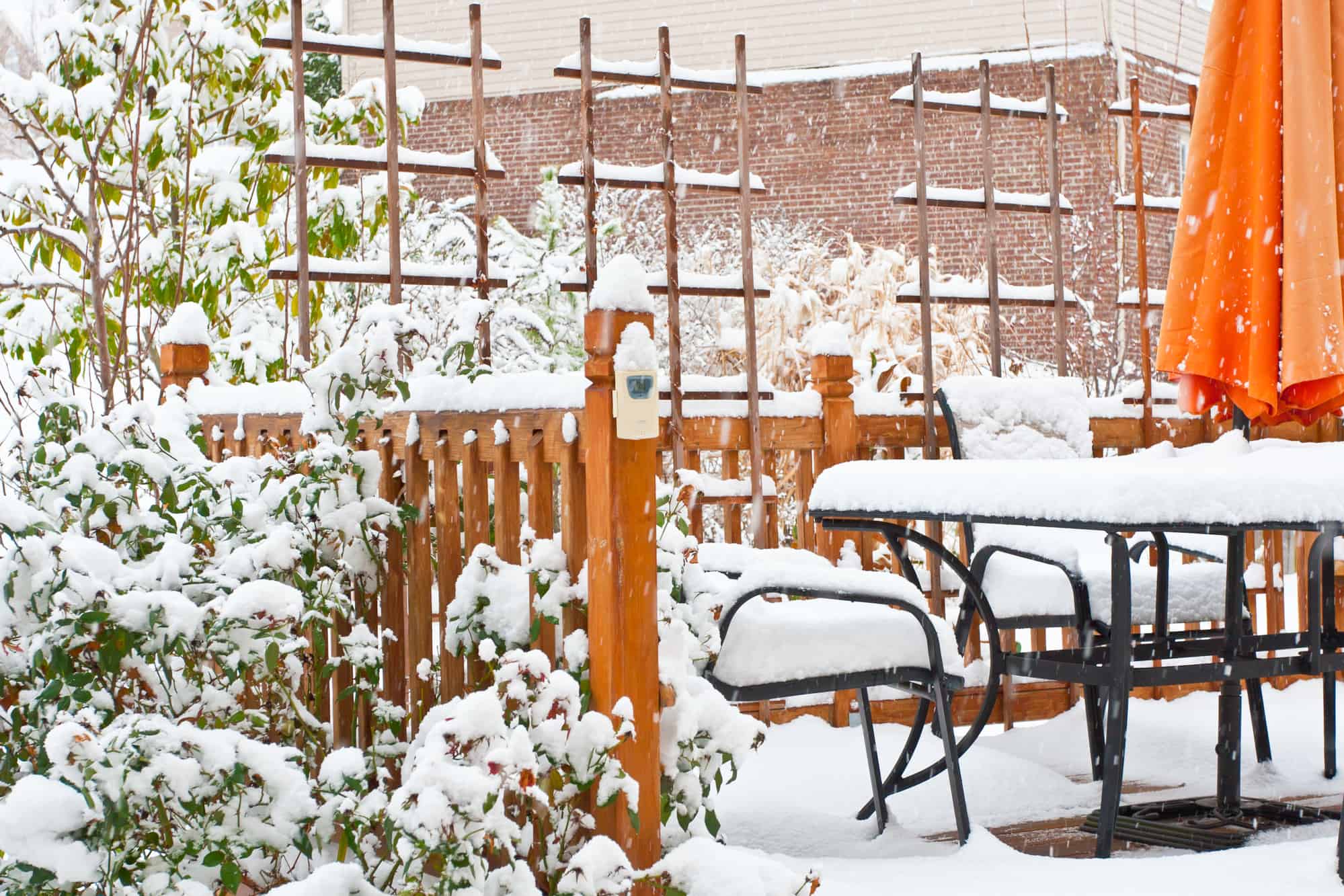 Waking up to the first bits of snow streaking down the window is definitely a cause for excitement. After all, the arrival of winter is an important precursor to Christmas!

The magical air that accompanies the winter breeze is why we love the season. At least, until it’s time to shovel away snow.

What’s even more annoying is when the snow melts and later refreezes as ice in parking lots, walkways, and patios. And it’s not just annoying — it can be a dangerous hazard. Therefore, getting rid of the ice is a top priority.

A lot of folks reach for rock salt to deice their patios. After all, it’s cheap and readily available. However, can you really salt your patio to melt ice?

Here’s the short of it:

While you can salt your patio to melt ice, the real question is “should you?” Salt is effective, cheap, and everywhere. However, it can wreak havoc on your patio. I can literally destroy concrete.

There’s the 10,000 foot view. But if you’re interested in learning more, read on!

The Case for Salt

You probably are aware about the use of salt by your local government to deice the streets and highways. If that’s anything to go by, then surely, we can conclude that salt will be an excellent deicer for your patio, no?

Besides, it’s been established that after a blizzard, the use of rock salts on roads reduces vehicular accidents by 87%.

In fact, salt is the most commonly used deicing chemical in the United States. And this banal, but special compound is spread at a rate of roughly 10 million tons per year.

So, seemingly, salt does a more than decent job as a deicer on asphalt. Yet, is this same compound the answer to melting ice on your patio?

How Does It Work?

How does salt work as a deicer? It simply lowers the freezing point of water, and presto!.

Note that, at 32°F (0°C), water turns into ice. At this point, and during the winter, a rather thin layer of water wraps the ice on any icy surface. Consequently, the water molecules and ice molecules begin to interact.

When salt is thrown into the fray, it lowers the freezing point of water to about 25 °F. This causes what is called freezing point depression. At this point, salt frustrates water molecules from readily forming into ice.

If the evidence given above is anything to go by, the verdict of the jury will be unanimous and unequivocal – that you can use salt to melt ice on your patio. Well, of course you can! But as we hinted at above, you shouldn’t.

However, the problem isn’t necessary the salt itself. The problem lies in the continuous freezing and thawing of ice.

Though concrete and other hardscape materials, are solid, they are not flexible. They may also be porous.

It won’t happen overnight. However, if your patio is made of concrete or some other hardscape material, prolonged exposure to moisture will cause it to absorb water.

As long as it remains frozen, ice covering your patio does no harm to it. Yet, some water will seep into the pores of your patio should the ice melt.

It’s therefore the pressure from this continuous freeze-thaw phenomenon that’s likely to cause cracks and spalls to your patio. It matters little that the material is concrete, pavers, or natural stone.

Salt exacerbates the damage caused by the process. It accelerates the number of freeze-thaw cycles that concrete is subjected to.

Again, salt attracts water readily. Within concrete, salt will attract and hold up to 10% more water than concrete with no salt. More water means more expansion within the concrete when it freezes; meaning more damage.

Also, salt may leave pock marks on your patio, may dis-colorize your patio’s surface, or even irritate the paws of your four-legged furry friends.

Alternatives to Salt for Melting Ice

While salt is an effective deicer, there are equally good alternatives out there. Some even melt ice better than salt!

Made of citric acid, vinegar proves effective in melting ice. You may have to apply it a couple of times for maximum effect.

Beet juice reduces the freezing point of water. What’s more, it causes no environmental hazards, making it safe for your pets and concrete.

Technically, calcium chloride is a salt. However, its effect on your patio wouldn’t be as harsh as rock salt would be. Again, this compound lowers the freezing point of water to about -25°F. This makes it one of the most potent deicers.

Yes, you can even manually remove the ice using some specialized tools designed for the purpose. Earlier this year, we wrote a through guide on the best tools to break up ice.

One thought on “Should You Salt Your Patio to Melt Ice?”

link to Can You Really Cook Food Using a Propane/Butane Torch?

If you’ve ever tasted a delicious crème brûlée caramelized with a kitchen torch, you’ll understand why it’s a must-have tool for any chef. However, because these torches use gases like...

You’re tired of mowing, pesticides, watering, and outdoor maintenance. You’ve been thinking about replacing your old lawn with artificial grass, but your budget is tight. So what’s the cheapest...