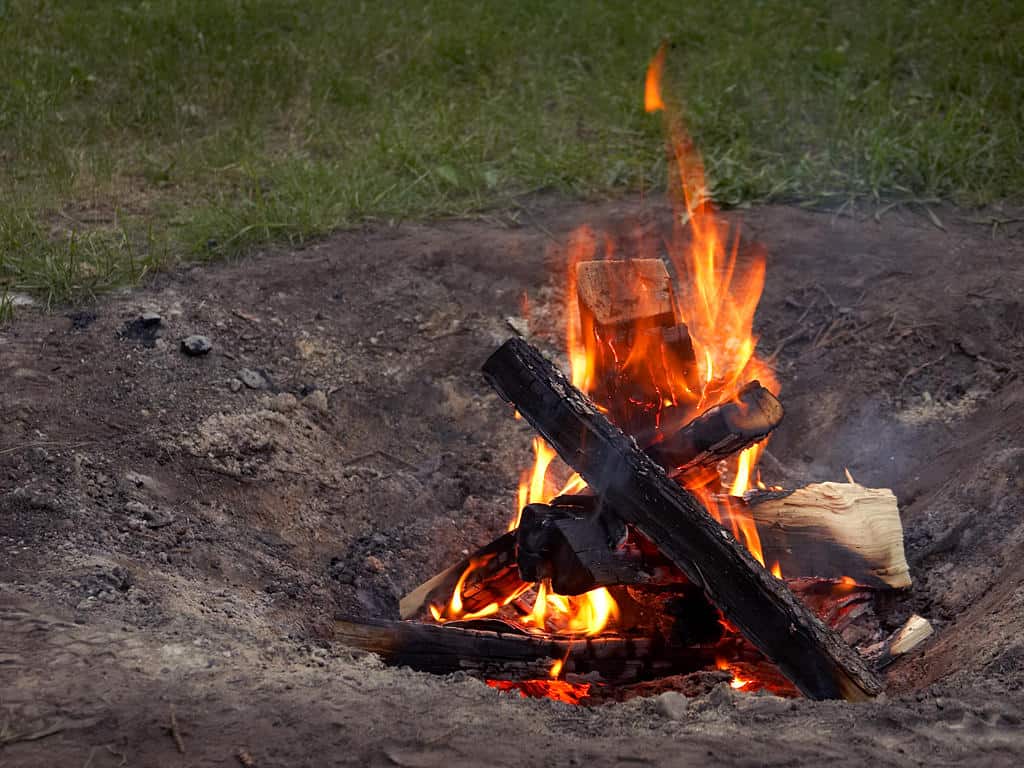 Smokeless fire pits? That doesn’t make any sense — can you even have fire without smoke?

It sounds too good to be true, doesn’t it? To be honest, you’re right: the term “smokeless fire pits” isn’t entirely accurate.

Yes, smokeless fire pits generate smoke. So why call them smokeless? Well, manufacturers engineer the fire pit’s airflow to reduce the incidental smoke from burning wood. This has quite a few advantages, as you’ll see.

How do they work?

To understand how they work, you first have to understand where smoke comes from. But wait, smoke just comes from fire, right? You’re not wrong, but it’s a bit more complicated than that.

Plainly put, fire pits generate smoke in a process called incomplete combustion. This means that the fire lacks the necessary oxygen and heat to completely burn the fuel.

Smokeless fire pits work by increasing air flow, which promotes complete combustion. This means that nearly all particles burn and convert into light and heat.

I hinted to it earlier: some smoke is still generated by smokeless fire pits. A smokeless fire pit just means that the vast majority of particles burn up into light and heat. The kind of heat and oxygen necessary to completely eliminate smoke simply isn’t possible in your backyard fire pit.

Additionally, CO2 is still generated when burning wood in smokeless fire pits. Just because you don’t see cloudy smoke doesn’t mean that you’re not introducing CO2 into the environment!

Let’s dive in and explore the benefits!

If your firewood costs are eating a hole in your wallet, the efficiency of a smokeless pit might be what the doctor ordered. The air injection of the pit helps the fire burn more completely.

This means that you get more heat from a smaller amount of wood!

Here’s another benefit coming at you courtesy of the engineered air injection. Since the fire uses more of the wood as fuel, it leaves behind less ash, charcoal, and sediment. If you’ve ever cleaned out a fire pit, you’ll know how much of a blessing this is!

Additionally, the lack of smoke will go a long way to prevent stains on nearby surfaces. Soot easily stains wood and textiles — and the stains aren’t easy to remove!

The pungent smell of a burning fire definitely creeps up on you. Most folks don’t even realize it’s happened at first, until they get too close to another person. The last thing you want is to get rejected for a hug because you smell too smokey!

Naturally, this isn’t a problem with smokeless fire pits. To be fair, there’s still an aroma. But the smell isn’t strong enough to curl your toes.

For many people, this benefit also has the end result of preventing eye and sinus irritation typically caused by smoke. If you or your standard roster of guests have allergy problems, a smokeless pit can be invaluable!

Did you know that the airflow (and subsequently, the burn speed) remains consistent over the duration of the burn session? I didn’t either, but this ended up being the thing I liked most about my smokeless fire pit.

Once you find an amount of wood and airflow setting you like, it’ll be even for the rest of the night.

This benefit is often overlooked by many people. The truth is, adding a bit of covertness to your fire pit can be a handy thing!

If you’re prep-minded or simply have bothersome neighbors, keeping your pit on the down-low provides an immediate benefit. You won’t have plumes of smoke notifying people of your location.

In fact, unless your neighbors see the warm ambient glow of the flames, they probably won’t even know you’re burning.

I’ve seen first-hand how chaotic wind can turn an outdoor gathering into a nightmare. With whirling embers and smoke that changes directions every few minutes, it’s almost impossible to burn when the weather is windy.

Luckily, smokeless fire pits don’t have this problem at all. If there’s one thing that they’re good at, it’s airflow management. One less thing you have to worry about!

So now that we’ve explored the advantages, let’s look at options on how to get a smokeless fire pit. The most cost-effective approach is to simply build your own.

If you want to build one as cheaply as you can, you can construct what’s called a dakota fire hole.

As the name suggests, it involves simply digging a hole in the ground. Then, you can take a half-step to the side and start another hole, making sure to dig diagonally. Once you connect the two holes, your dakota fire hole is complete!

If you’re still not picturing it in your head, check out this awesome YouTube video from the David’s Passage channel.

This is definitely an easy, quick, and fun option.

What about rocket stoves?

A lot of folks write in to me and ask about how they can build their own DIY smokeless rocket stove. While you can do this, it requires a strong aptitude in metal-working.

What are rocket stoves?

Rocket stoves are a style of wood burning stove designed to burn hot and efficiently by allowing maximum airflow. They’re most often portable and easy to move.

I’ll be creating an entire article about the nuances of rocket stoves shortly.

If you’re not a big fan of the dakota fire hole or would simply rather not go the DIY route, there are plenty of great smokeless fire pits that you can buy online. It used to be that Breeo and Solo Stove were the only names in the game, but plenty of other manufacturers caught up.

After comparing the available options, I’ve found the five best smokeless fire pits that you can buy.

For many, “smokeless fire pits” and the Solo Stove Bonfire are one and the same. From their humble Kickstarter beginnings, they raised more than one million dollars and built a beautiful, unique fire pit.

What makes it so special?

The Solo Stove Bonfire is so great because it uses top-notch materials and a precision construction process. This results in a durable product that boasts a more complete burn. Check it out:

However, not everything is so rosy. There are two major cons to consider when looking at this fire pit.

First, the price. The list price of the Solo Stove Bonfire is a hefty $350 (although you can often find it cheaper on Amazon). For those looking for a budget option, this might push the Solo Stove out of reach.

Next, the Bonfire doesn’t offer a large container for burning firewood. Unlike some other models we’ll mention, you’ll have to really tame your wood before providing it to the Solo Stove.

While I like the Solo Stove a bit better, the Double Flame Breeo is quite a contender as well.

It’s high quality and durable, same as the Solo Stove. However, it has a slightly higher list price (again, Amazon often has it cheaper. You can check the price here).

It has a similar design to the Solo Stove, differing in only a few ways.

One major advantage that the Breeo has is the addition of cooking accessories. It was built with grilling in mind! If you think you’ll want to cook over your fire pit often, this may be a game changer.

One major disadvantage is the weight. While the Solo Stove Bonfire weighs 20 lbs, the Double Flame Breeo clocks in at a whopping 42 pounds! If you don’t plan on moving your fire pit, this may not be an issue. However, it’s something to consider.

The BioLite may seem like an odd duck when placed next to the other units. You’d be forgiven for furrowing your brows!

However, if you choose to go this alternative route, you have a few interesting advantages at your disposal.

I personally think the BioLite is awesome. While the addition of the smartphone app is a bit gimmicky, it boasts a ton of utilitarian features. However, there’s no denying that it’s not a typical fire pit!

What should I put my smokeless fire pit on?

Unlike your standard wood burning fire pits, smokeless fire pits are supremely portable. With that being said, you should always put them on a non-flammable surface. If you choose your lawn, be warned that the smokeless fire pit can kill your grass (just like patio furniture)! If you choose your deck/patio, be sure to add a fireproof deck pad between the fire pit and the wood.

Can you cook over smokeless fire pits?

Yes, you can cook over smokeless fire pits! In fact, the BioLite expects it by default. The Breeo offers accessories to enabling cooking as well. I’ve also seen folks cook over a Solo Stove Bonfire.

Why is my smokeless fire pit smoking?

Alternatively, your airflow might be impeded and unable to reach the fuel source. Check your unit for obstructions and make sure to clean it fully, following manufacturers recommendations.

What kind of fuel should I use?

Your smokeless fire uses the same kind of fuel as a regular wood burning fire pit. Dry firewood, branches, kindling, and sticks are all great options. The BioLite can even burn charcoal for grilling purposes.

You should never use wet, green, or sappy wood in your smokeless fire pit. This along with moss, bark, and pellets can create undesirable smoke. Additionally, never burn pressure treated wood, as it can contain chemicals that are harmful to breathe.

Redesigning your patio or garden can be an exciting project but can also be costly. So, when selecting the style and furniture, you might be looking at creating a stylish area that will stand the...

A patio makes a beautiful outdoor living space where you can fire up the summer barbecue or keep warm during a chilly autumn evening. Since each season poses different challenges to the patio, you...