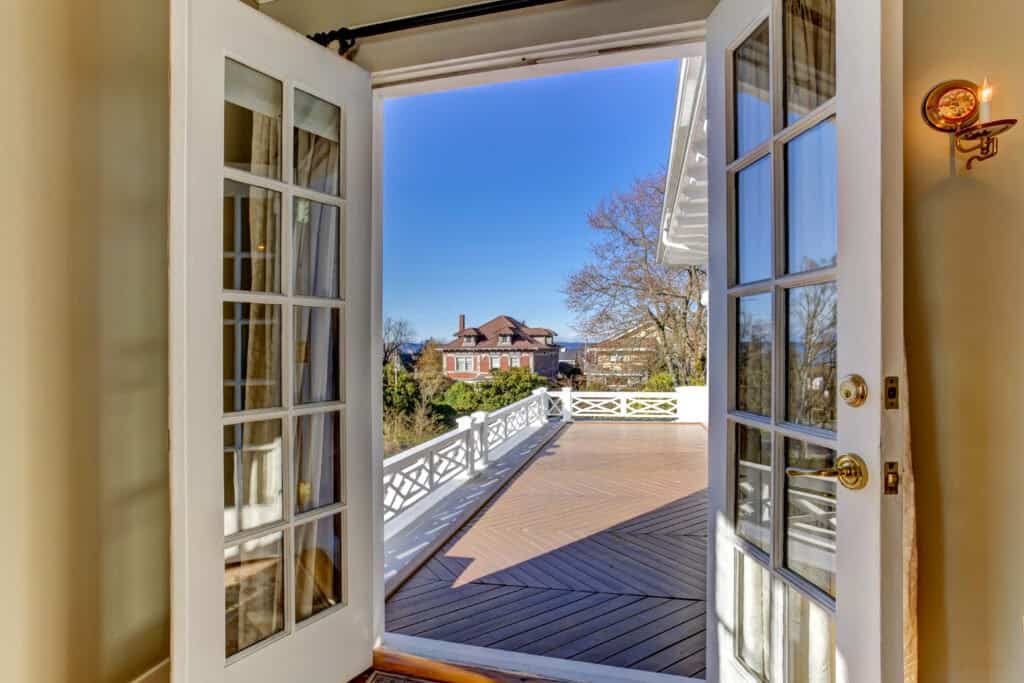 French doors are a huge trend for homes these days, but sometimes what is popular does not meet your personal preferences. For example, maybe the build of your home does not allow for French doors, or it would be too much work to add some in. Luckily, there are plenty of alternatives to French doors that you might love!

Each of these alternatives looks a bit different, and they all have their pros and cons. Keep reading so you can discover which door styles you might want to look into and implement in your home.

Contrary to popular belief, French doors did not get their name because they were made in France. Instead, this name refers to the style of door that they are. French doors are typically double hinged, opening outward or inward, depending on the room design and space.

When it comes to natural light, French doors really let it all through. These doors usually have wood panes with glass in each one. They cover the whole door and let a lot of natural light through, even when closed. The windowpane type, glass type, and door size can all be customized, and there are many different versions of French doors to choose from in a lot of different stores.

The natural light that French doors provide is such a nice benefit. It decreases the amount of electricity that is needed to light the home throughout the day. Having that natural light come through an exterior door is such a great feature, and many people looking for alternatives will gravitate to a door that will let in natural light.

While French doors have a lot of pros, even more than we mentioned, they also have cons. While French doors are trendy and very beautiful, they can be quite pricey. This can be a big problem if other renovations occur simultaneously or if you can’t justify spending the money on them.

French doors can let in outside air and water because where they close is not always sealed tight. The little gap between the doors, when closed, can let in outside air, making it very difficult to keep a house cool or warm, depending on the season. This can bring up your energy bill a sufficient amount. Luckily, we wrote about how to fix the gap here.

French doors are also less secure than other options because they are made with large glass and thin frames. So if you live in a dangerous area, this type of door may not be the best choice.

Reasons to Find an Alternative

While there are many great things about French doors, you came to this page to learn about the alternatives and why they might fit your preferences or needs. Therefore, before we talk about some of the most common alternatives, it is important to consider why you want to look for an alternative. Here are just a few reasons to find an alternative to French doors.

This first reason is widespread and has driven many people to look for an alternative to French doors. French doors, as mentioned before, can be costly. When something as simple as exterior doors looks like it will drive the price of your renovations through the roof, you might think twice about actually getting them. This can lead you to look for a cheaper alternative. Unfortunately, they are also more fragile than many other options, so you may have to spend more money on repairs or replacements.

However, some of the alternatives that we will talk about in this article can be more expensive than French doors, so keep reading to understand other reasons to look for another style.

French doors are trendy, and they look stunning on many houses. However, they do not look good in every style of the house. It would be a big mistake to spend so much money on exterior doors that do not look good in your house. You might still like a lot of the features of French doors, though, so looking for an alternative is a great way to find something that looks good on your home and that fits those features that you like.

Another thing to consider is that even though French doors are popular and so many people really like them, they might not fit your style personally. Just because they are popular does not mean that you have to like them too. Again, you might like the features, though, so looking for an alternative that highlights the best features can be the best thing for you to do.

Finally, you might want to look for an alternative to French doors if the house or apartment they will be in does not provide enough space for them to open. You can customize french doors to be smaller, but they are typically bigger than many other options. This can cause a problem if your home does not have enough space for the doors to open. Of course, you can move furniture around in the room, but if they make things cramped, you might be better off finding an alternative that requires less space.

The first alternative to French doors is sliding glass doors. These doors are widespread, and so many homes have them. While they might not seem like a very chic option, there are actually different styles, and they all bring something a bit different to the table.

Some of the benefits to sliding glass doors are that they bring in a lot of natural light, even more than French Doors, they take up more horizontal room along the wall, but this allows them to take up no interior room when being opened. If taken care of, these doors can and will look beautiful on almost any style of home. They are convenient, modern, and do not sacrifice the amount of natural light you will receive.

They can often stick or slide difficultly, so we’ve written on how to make them slide easier, how to childproof them, and how to unfreeze them in the winter.

The next alternative is bi-fold doors. These doors can be incredibly chic and look very expensive, but they also don’t cost nearly as much as French doors. They are less common than sliding glass doors, but they have their own benefits that people should be more aware of.

Bi-fold doors take up quite a bit of space along the wall, similar to sliding glass doors, but this allows them to let in a lot of natural light. They are typically each one big pane with glass inside of it. The hinges allow them to fold against each other, kind of like folding a paper fan. So they can be pushed to the edges and leave a great, big opening into your backyard or onto your patio.

These doors do not take up much space inside the room because they do not swing open as many other doors do. This leaves room for you to decorate the interior of that room however you like because none of it will prevent the doors from opening. Bi-fold doors allow a lot of natural light to enter, and they do not hinder the view outside. They can make a home feel bigger in the same way French doors do, just without the enormous price tag.

In terms of appearance, center swing doors are the most similar to French doors. When it comes to function, however, they are not the same. Center swing doors do not allow a lot of space to be opened up to the outside. As a result, they look beautiful when closed, but otherwise, they function as a normal swinging door.

Because this alternative is a door that swings open, it will require enough space on the interior to do so. This is not very convenient, but the swinging space is a lot less intrusive than French doors because it is only one door. Despite there only being one functioning door, there is still a lot of natural light that can come through a center swing door. The second “door” looks just like the first — however, it doesn’t open. There is still a big pane of glass that lets in a lot of light and offers a great outdoor view.

Center swing doors are probably the most similar in appearance to French doors, and there are many different styles to choose from. However, they look very chic and can be the perfect alternative you have been looking for. Center swing doors have many of the same features, pros, and cons but are just a little different and a lot cheaper!

Pocket doors are quite common on the interiors of homes and are seen pretty frequently. These doors slide in and out of the frame to open and close them, but did you know you can have exterior pocket doors? These doors extend along the entire wall and are a bunch of tall panels with glass in them. When closed, they can look very similar to bi-fold doors. The difference is that instead of folding over each other, each pane will separate and slide into a pocket in the wall and be completely out of the way!

These doors let in a ton of natural light when opened or closed. They essentially make the whole wall into a huge window! The benefit of these doors is that they don’t swing open to interrupt your interior space, but they slide and are completely out of the way when open. It’s like there are no doors at all! These doors might have a similar problem to French doors, allowing interior and exterior air through the cracks. However, high-quality doors will have a seal in between each panel, preventing this costly occurrence.

The biggest downfall to this alternative is that exterior pocket doors can be costly. In many cases, they are even more expensive than French doors. They are very modern and look very expensive  (because they are). If money is not why you need to find a French doors alternative, then these could be the doors for you.